Black Earth has been very fortunate to gain a business partner and friend in southern Illinois, Mike Shotts-Top Shot Ag. 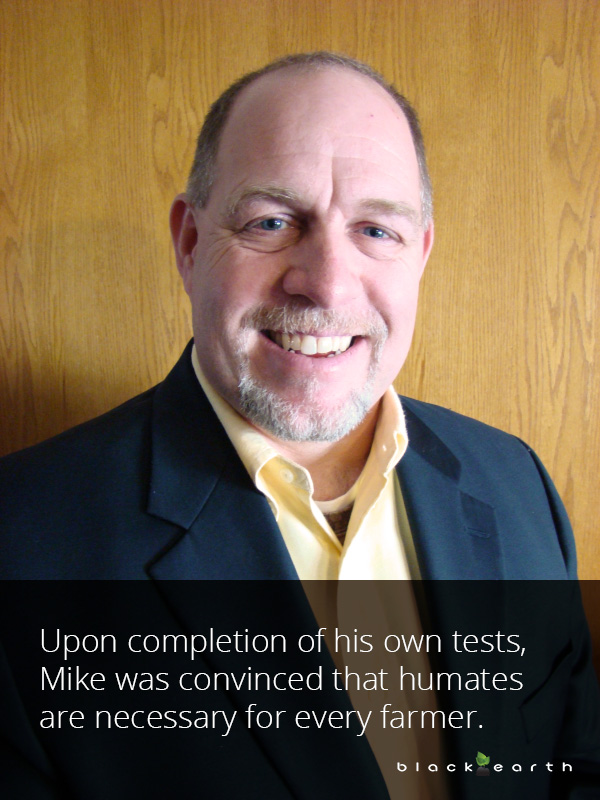 Mike is a small business owner, farmer and family man who heard about the benefits of humates only a short time ago.

With his in-depth knowledge in local agriculture and passion for improving the lives of others, he decided that he could benefit his community of growers, and himself, by adopting a farming program that will maximize yields and move towards more sustainable farming practices.

He began this journey by researching all he could about this product that claimed to be a sustainable, organic soil input that increased yields, reduced demand on synthetic fertilizers, and also improves the biological life within your soil. The answers he found motivated him to begin sourcing the highest quality humic material and trial it for himself. Mike applied 200lbs/acre on a variation of soil types where he planted corn. The trial was conducted in 2012 on land that had never previously received humic applications and its history was of conventional fertilizer practices.

Now, if you look back to weather conditions of 2012, you will remember that the Midwest had a severe drought.

This was compounded with high winds at the end of the year which saw many farmers harvesting yields of just 50 bushels or not harvesting at all. However, Mike was not one of these men. Mike was able to harvest his fields and noticed some significant differences between his crop and his neighbors.

Firstly, due to the severely dry conditions, all neighboring corn was brown and wilted while his were green and lush. Secondly, the heavy winds had blown corn crops over so that they lay close to the ground while his stood tall. Most importantly, once the harvest was done, he found that he had a 100% yield increase over the neighboring blocks. In conclusion, as humates were the only difference to their operation, this application had provided significant benefits to a crop that was forced to grow in the most stressful conditions.

Upon completion of his own tests, Mike was convinced that humates are necessary for every farmer.

As such, Mike decided to dedicate his time and knowledge to the enormous task ahead. He began by setting up a small business, consisting of himself. He got on the road and spread the word of his results, how he did it and how other growers can do the same. Needless to say, the news was happily received and Mike found himself a very busy man.

2013 is Mike’s first full year distributing Black Earth’s humates and has grown at miraculous speed. He now has retailers purchasing Black Earth Humates throughout Southern Illinois and Indiana. Even after such a successful year, Mike shows no signs of easing off. The growers currently trialing Black Earth’s humates have now harvested their 2013 crops and are very pleased with the results. Even with a season of ample rain and sunshine, the increased yields directed by the application of humates have convinced other growers to take on the program and expand application on additional acres.

With the word spreading and Mike’s commitment to sustainable agriculture stronger than ever, the forecast for 2014 looks bright. As always, we wait in anticipation for what Mother Nature will bring us in the coming year and what obstacles will need to be overcome by the worlds’ growers. What we can be assured of is that Black Earth will be working hard with Mike Shotts-Top Shot Ag in spreading the knowledge of humates.

See the research for yourself. We have all our agriculture and horticulture research free to download, just click the button below for your needs.