In addition to working as a valuable drilling fluid additive, Black Earth Humalite is also a highly efficient agricultural additive, that can help enhance and reclaim toxic soil and help with the growth of microorganisms.

A naturally oxidized coal-like material that bears a resemblance to Leonardite (also known as Lignite), humalite has a greater humified organic matter content as well as lower residuals. 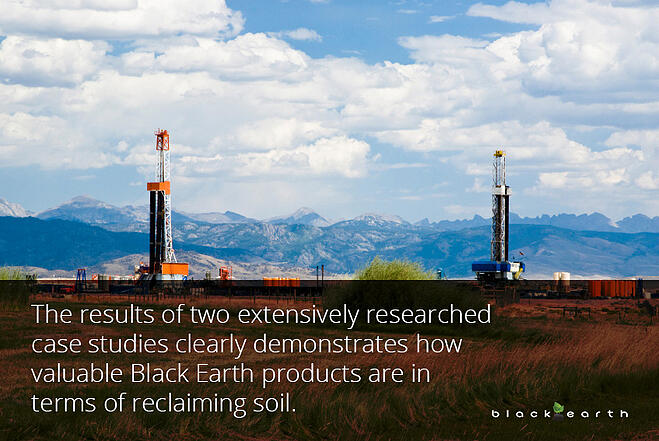 Research has shown how crucial Black Earth is when used as a soil additive. Humic substances are also known to reduce toxicity in damaged soil as well as enhancing hydrocarbon remediation. These additives are especially important in reducing lost circulation, seepage loss and a variety of other functions.

The results of two extensively researched case studies clearly demonstrates how valuable Black Earth products are in terms of reclaiming soil, regardless of the condition.

In one particular study, extremely high clay soil was contaminated with diesel up to 1% by weight; Black Earth humic material was added ranging in doses of 0 to 5% by weight. The soil was rotated on a weekly basis, with the moisture content increased to a 50% optimum, over the course of a 90 day period.

The end result showed that humalite greatly improved the structure of the soil. Samples were taken and inspected for particle size distribution, moisture content, pH, and nutrients, among others, which drew the conclusion that the soil was greatly improved by the addition of Black Earth. In fact, the soil’s water retention had increased at a rate of 21%, as well as the carbon to nitrogen ratio. More microorganisms were prevalent and the soil boasted a rapid growth of microorganisms responsible for the biodegradation of hydrocarbons.

Toxicity Reduction in Mine Tailings

Another study focused on mine tailings from a gold mine in Manitoba, which was highly contaminated with copper, rendering the soil unable to produce any plant life. Black Earth and other amendments were applied to determine whether the copper could be counterbalanced in order to allow plant growth.

The materials were mixed with soil gathered at the site and monitored for 24 weeks. The results were analyzed to determine how much copper existed in the soil. The average value for total copper content of world soils is 30 parts per million (ppm); the total copper concentration in this particular soil featured a dramatic copper toxicity of  2000 ppm.

In addition to Black Earth, wheat straw and lime were used, yet Black Earth proved to be the most effective in reducing the soil’s toxicity. This particular study proved valuable in reducing the toxicity and therefore remediating the soil by creating an environment where the soil can support plant life and associated microorganisms.

See the results Black Earth can bring your downhole operations by reading our research studies.